Offshore wind power generation is developing as a means of turning sustainable energy into a primary source of electricity. Currently, divers inspect offshore wind farms as well as identifying and photographing the living creatures that attach to the facilities and swim in the surrounding waters, but there are concerns about the safety of such work and the availability of qualified personnel. At the same time, underwater robots are increasingly being used to conduct inspections, but it is challenging to control the position and attitude of the robots because undersea and tidal current conditions can cause tethers to drift or interfere with the robots as they perform their tasks.

For those reasons, TEPCO aims to develop underwater robots capable of performing some of the tasks currently performed by divers. To that end, the group has been investigating the challenge:“Robotic underwater inspection and maintenance technology to lower costs, increase efficiency for offshore wind power generation facilities”.

One theme of the cabinet’s Strategic Innovation Program (SIP) is the “Zipangu of the Sea Project: Next-Generation Technology for Ocean Resource Exploration.” In connection with that project, NMRI has been researching methods involving the operation of multiple AUVs (autonomous underwater vehicle). Their research led to the development of Hobarin, an AUV capable of withstanding pressure at depths up to 2000 meters. In a successful test conducted in October 2017, the vehicle autonomously photographed hydrothermal vents on the ocean floor west of Kume Island.

With Hobarin now ready to be deployed, NMRI is surveying the sea floor in the waters surrounding the Ogasawara Islands, Nansei, and Izu islands for mineral resources. In addition, NMRI responded to requests from other agencies by expanding the use of Hobarin in other areas including surveying fisheries resources such as bottom-dwelling fish or investigating sunken ruins at the bottom of Lake Biwa. This explains why they have also been considering the possibility of using the vehicle to inspect offshore facilities. 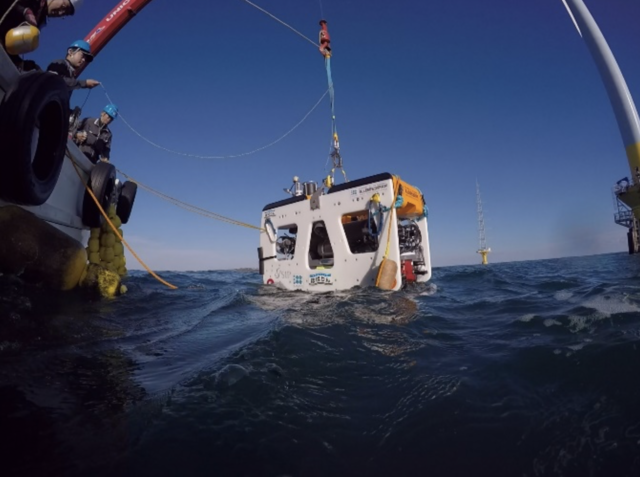 After an internal screening process, we decided to implement a joint-research project with NMRI to determine if Hobarin’s autonomous navigation function, which allows it to take high-quality seafloor photographs along a designated course, could be adapted for inspection of offshore wind farms located at depths of up to approximately twenty meters. 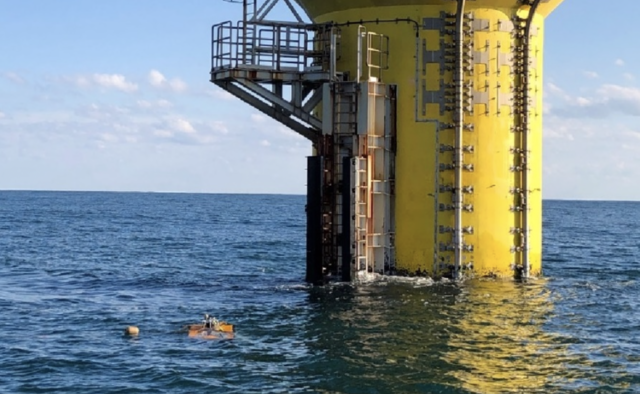 In our November 2018 experiment, we used Hobarin, the AUV developed by NMRI, in the rough conditions (muddiness, rolling waves) found in the shallow sea surrounding the Choshi wind farms, where the water reaches depths of 20 meters or less. Our investigation confirmed the possibility of conducting inspections using autonomous navigation to take photographic images.

Currently, we are conducting R&D to develop underwater robots with autonomous navigation functions that can conduct inspections in oceanic environments with muddy conditions and violent swells. 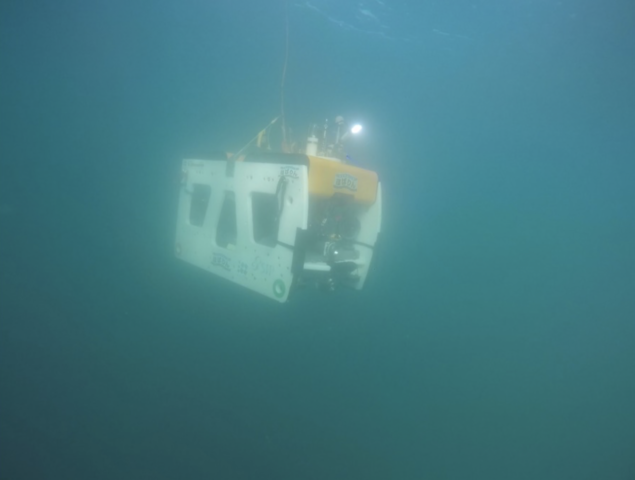